Reasons for Bad Breath and How to Avoid It 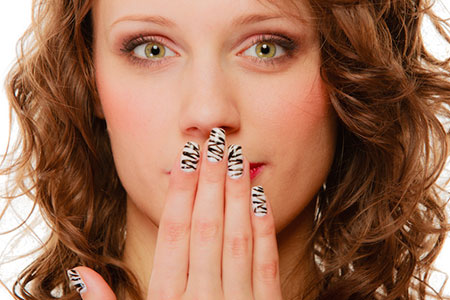 Everyone is self-conscious of their breath from time to time. As we’re sure you can imagine, there are many causes to halitosis. It really breaks down to either your hygienic habits, the foods you eat, a mouth disease/condition or a combination of the above.

Poor hygienic habits can lead to developing gum (periodontal) disease, ultimately caused by a buildup of plaque. As plaque ages, it uses sugar to develop into an acid that starts to eat through the outer layer of your teeth (enamel). Within that acid lives odor causing bacteria and dead cells. It may seem obvious to say, but a lot of people don’t realize that the food you eat is not the only cause of bad breath. Consistently overlooking hygienic routine can be the main cause of not only the odor but the disease that is causing it. It’s a domino effect: if you can get to the root of the issue, the rest should take care of itself.

Another condition that causes odorous breath is simply called dry mouth, or xerostomia. Obviously, the primary symptom is lack of salivation. This can be caused by a number of things: medications, salivary gland issues, or excessive/continuous breathing through your mouth. Saliva neutralizes the acids that are produced by plaque. It also cleans away the bacteria and dead cells that can accumulate on your tongue, gums, and cheeks. If there is a serious lack of saliva then these odor causing bacteria will live inside your mouth and are forced out through the exhalation process.

One of the other causes is what you are eating. People may say after eating garlic and/or onions that they’re going to brush their teeth. Have you ever noticed that within an hour the terrible odor and taste seems to make a comeback? That’s because potent foods such as those two (and many others) contain chemicals that work their way into your bloodstream. Once that happens, the odor-causing chemicals manifest themselves in your lungs and then escape through your breath. Brushing, flossing, gum chewing, or using mouthwash will always only be a temporary fix for smelly breath. The odor is only expelled once the chemicals make their way through your entire system.

So while some can’t help it, there are some precautionary measures one could take to stay healthy and reduce the chance of frequent bad breath.

What helps? Brush and floss more often, scrape your tongue, avoid foods that stink up your breath, quit smoking/chewing tobacco, or use a mouth rinse.

Suspicious that you may have halitosis or dry mouth? Concerned that you may have developed gum disease and it’s affecting your day to day life? Call Crestwood Dental Group today for an appointment/consultation so that we can help to rectify the problem. It’s never too late!

Back to Blog Page
No Dental Benefits?
We have you covered!
Join our Membership Plan
and SAVE TODAY!